Had a chance to take some friends from Iran up Yamnuska last weekend.  They are petroleum engineers studying at the U of C for the semester on an exchange program. 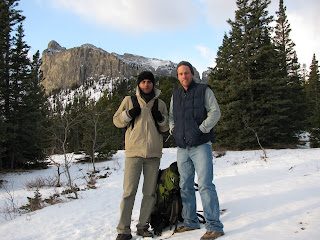 Rezza and I with Yamnuska in the background. 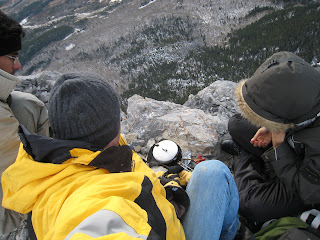 A little coffee on the top! 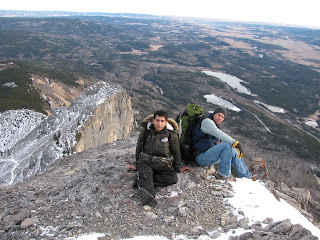 It was a beautiful day… until a cruel wind picked up and nearly froze us in place.
rhetoric: emphasizing style at the expense of thought
We live in an age of rhetoric.
The media is full of rhetoric.
So is the church.

What is the explanation for anti-Semitism? That is the question powerfully asked in this little video.

http://www.jpost.com/servlet/Satellite?pagename=JPost/Page/VideoPlayer&cid=1194419829128&videoId=1226404742423
Why is it that anti semitism is alive and well today after all that has happened in the last 100 years? And it is not just Islamic nations. I caught just a small glimpse of this a while ago when a company in Austria refused to do some prototyping for me. I was told that they did not do ‘religious items’… but I am pretty sure what they meant is that they would not do Jewish menorahs!
It is equally difficult to understand the continued preservation of the Jews apart from the promises of God.

Thus says the LORD, who gives the sun for light by day and the fixed order of the moon and the stars for light by night, who stirs up the sea so that its waves roar– the LORD of hosts is his name: “If this fixed order departs from before me, declares the LORD, then shall the offspring of Israel cease from being a nation before me forever.” Thus says the LORD: “If the heavens above can be measured, and the foundations of the earth below can be explored, then I will cast off all the offspring of Israel for all that they have done, declares the LORD.” Jeremiah 31:35-37 ESV