This is amazing! These little critters are the fastest moving organism on earth… or at least their jaws are. Apparently they can wind up their jaws like a crossbow and release them with an incredible amount of force, which they sometimes use to propel themselves. It appears that they have yet to evolve stabilizers. lol

I stumbled across some old videos of Francis Shaeffer and thought this little review of recent history very interesting.  It is a sober reminder of where we are at today and how empty life is when all we have to live for is ourselves.

So what was left? Apathy. Having been worn out trying to find meaning, forgiveness and love… and failed, all that was left was to go to sleep.

But there is cure for our disease! There is a Doctor.

Come to me, all who labor and are heavy laden, and I will give you rest. Take my yoke upon you, and learn from me, for I am gentle and lowly in heart, and you will find rest for your souls. For my yoke is easy, and my burden is light.” Matthew 11:28-30

I just finished watching the Senate debate over the 1 trillion dollar stimulus package. (I know, I need to get a life)

But it is a monumental decision that represents an additional 12,000 debt for every household in the U.S. (if I understand correctly) In Canada we have had our own debate and have similarly chosen to go the route of massive spending.

I guess I can understand the need to inject capital into the financial system in order to keep credit flowing but I lack faith in our govn’s ability to spend money efficiently or effectively. At some point we have to take our medicine and the prescription is not more debt.

Robert Reich in his book ‘Supercapitalism‘ points out some of the serious problems that exist with the relationship between the corporate world and the gov’n. He points out that our gov’n has to balance the demands of the ‘consumer / investor’ with that of the ‘citizen’. Each one of us is both. For example, as a citizen, I want my town to have a dynamic downtown core. But as a consumer, I want to have the option of going to Walmart where I can buy things for dirt cheap and as an investor, I want my stock in Walmart to go up. The corporate world will always cater to us as a ‘consumer / investor’ but only our elected officials can act on our behalf as ‘citizen’. But our government often doesn’t and this represents a serious problem for democracy. Since the 1970’s, corporate lobbying in the Washington has grown into a massive industry that has effectively drowned out the voice of citzen groups.

Ultimately this is a problem for the markets as well. We can no more have healthy free markets without an uncompromised regulator than we can have a good soccer match without a guy on the field with a loud whistle and yellow cards. As much as we might dislike refs as players, we need them and we don’t want them hitting the pubs with the opposing team after the game.

While Obama is promising change, I wonder if he is willing to make the kind of change necessary? Putting a 500,000 cap on CEO salaries for U.S. financial institutions that have received bailout funds (which is nearly every major bank in the US) sounds like a good idea but I am not sure. We need the best people leading these corporations but how many CEO’s will be willing to take on that kind of responsibility when the pay is no better than that of a lesser position? A CEO at the helm of a multi billion dollar company will get paid more than the rest of us and, hopefully, he will make use of his salary for philanthropy. The size of the salary is not the problem, it is the lack of integrity. I would rather see the gov’n put regulations in place that adjust CEO compensation so that long term success is rewarded rather than year end balance sheets.

At gut level, it doesn’t seem right that some people should get paid so much while others struggle to get by. But what are the options in this flawed world corrupted by human nature? When I worked on a communal farm in Israel, I had a chance to see the effects of socialism on a community. When the idealism of the early days wore off, human nature took over and people got lazy. Many kibbutzim today are nearly insolvent. I read somewhere that socialism is misery equally shared whereas capitalism is wealth unequally distributed. That seems to be true.

But capitalism is only a system of economics. It has no heart. And this is where the church has a great role to play. Our society needs at least one institution (in the best sense of the word) that has a heart and that speaks a different language. That reminds its members to, “lay up treasure in heaven where neither rust or moth destroy” and that the true religion which the Lord our God finds acceptable is to “look after orphans and widows in their distress.”

I was watching Band of Brothers – ‘Carretan’ last night and had to write out this conversation that takes place between two soldiers.

Spears: Do you know why you hid in that ditch Blythe.

Blythe: I was scared.

Spears: We’re all scared. You hid in that ditch because you think there is still hope. But Blythe, the only hope you have is to accept the fact that you are already dead. And the sooner you accept that, the sooner you will be able to function as a soldier’s suppossed to function…

Whoever finds his life will lose it, and whoever loses his life for my sake will find it. Matthew 10:39

This is Klassen’s custom door opener made with an old hydrolic pump and assorted tractor parts. It is truly a piece of workship. 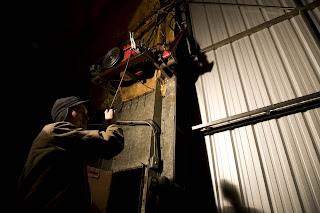 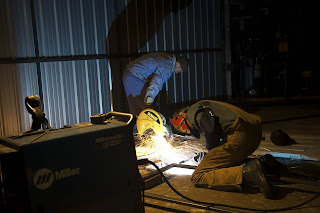