The trail started out broad and well defined but as I climbed out of the trees, it began to narrow and finally disappeared in a jumble of rocks at the base of the mountain. I scanned the rocky slope in front of me and traced a path to the summit. The going was easy at first but as I climbed higher the terrain got a little steeper and I was forced to use an occasional hand hold. But the summit was closer now and I was pretty sure the worst was behind me.

I came to what appeared to be nothing more than a low rising bluff and being so intent on reaching the top, I immediately lodged my boot into a crack in the cliff face and began to climb. The hand holds were solid and so I climbed higher. Somewhere along the way I crossed a threshold where to turn around and go back became more risky than to continue on. Fear began to dampen my enthusiasm but it was too late now. I assured myself that the top could not be that far off. It was still easy rock to scale and so I continued to scramble higher until the ground fell away beneath my feet and there was no turning back!

The hard granite deteriorated into something less solid and the hand holds became increasingly smaller. I was beginning to feel that my place on this mountain was becoming more precarious. But I climbed on! And then a frightening prospect sent a new wave of adrenaline through my veins. I reached out with my hand, grasping for something, anything that would allow me to pull myself up a little higher only to find that the next hand hold was beyond my grasp. I hugged the cliff face and focused on that tiny hand grip and that small part of my boot that was my only purchase on the mountain; and on life.

I looked down. The cars at the trail head appeared smaller than matchbox cars and the landscape stretched out below me looked like a miniature train set. I shouldn’t have looked down. My heart was racing now and so was my mind! My fingers started to cramp and the muscles in the back of my legs began to quiver under the strain. Sweat ran down my forehead and off the end of my nose. The world was silent except for the groan’s of the wind as it eddied and swirled through the crevasses in the rock; mimicking my own as I struggled to hang on. The reality of my situation began to sink in. All I had to look forward too was a 10 second free fall and then; every bone in my body splintered into a hundred pieces. This was the law of Nature, and Nature was all I believed in.

I’d always prided myself on being self sufficient. I’d made my own way in life and forged my own path. I got myself into this fix and I would get myself out of it. Kipling had it right.

If you can force your heart and nerve and sinew to serve their turn long after they are gone and so hold on when there is nothing in you except the will which says to them, Hold on!

But I couldn’t hold on. I had been clinging to this rock for hours and my muscles where wasted. Finally, in utter desperation, I began to call for help. No, I am trying to sound stronger than I was. I cried for help.

It was in that old mountain man’s firm grip that I discovered that heart and nerve and sinew were not enough. I needed grace.

Others went out on the sea in ships; they were merchants on the mighty waters. They saw the works of the LORD, his wonderful deeds in the deep. For he spoke and stirred up a tempest that lifted high the waves. They mounted up to the heavens and went down to the depths; in their peril their courage melted away. They reeled and staggered like drunken men; they were at their wits’ end. Then they cried out to the LORD in their trouble, and he brought them out of their distress. He stilled the storm to a whisper; the waves of the sea were hushed. They were glad when it grew calm, and he guided them to their desired haven. Let them give thanks to the LORD for his unfailing love and his wonderful deeds for men.

For it is by grace you have been saved, through faith– and this not from yourselves, it is the gift of God– 9 not by works, so that no one can boast.

Jon Kontz, a good buddy from Philly, came up for a few days. We spent a couple nights up on Abbots Pass. 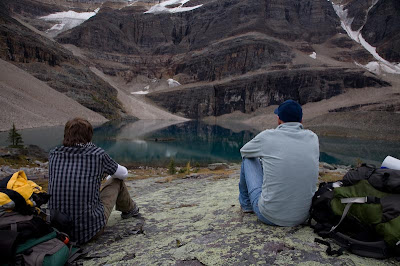 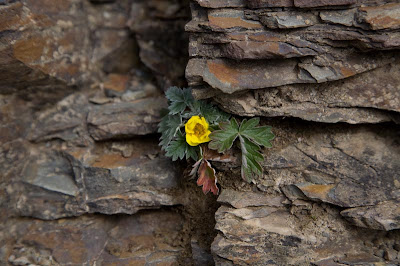 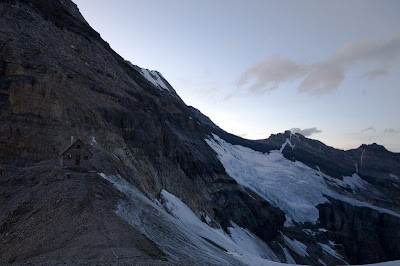 The AAC cabin where we stayed blends pretty well into the mountainside. It has got to be one the coolest places I have ever slept. Literally! 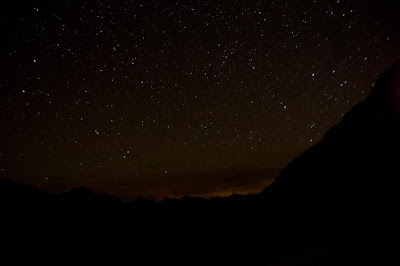 The night sky with the lights of Calgary in the distance. It was as though every star in the sky was visible that night. 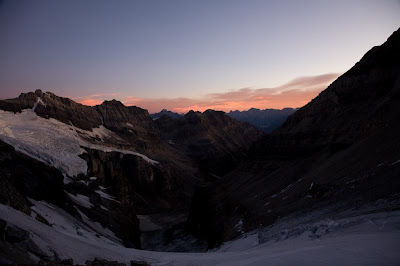 Panorama taken on a ridge of Mt. Victoria. 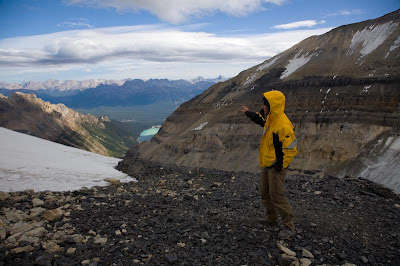 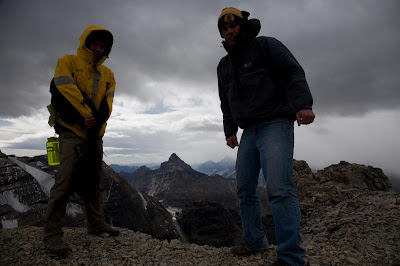 Part way up Mt. Victoria. It was so windy up there I thought it might take us right off the ridge. 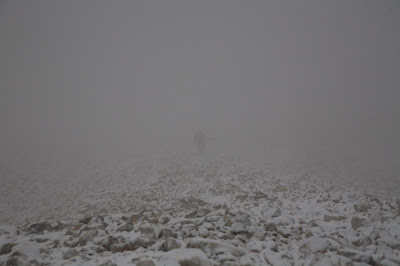 Bit of snow on the way down. Thankfully it let up soon after this picture was taken.