In “The First Circle”, Solzhenitsyn contrasts the world view of an agnostic and a Christian through the lives of two men, Nerzhin and Sologdin. Both are prisoners in the Gulag trying to make sense of their lives.

Disenchanted with Communism, Nerzhin has retreated into skepticism. Although he is a scientist working on a top secret project for Stalin, he wants to quit his work and return to hard labour so that he can focus on finishing a book that he started secretly writing.

Sologdin, on the other hand, is a Christian.  Solzhenitsyn describes him in the following way:

“He was a non entity, a slave without rights. He had been inside for twelve years, but because he had been sentenced to a second term, there was no knowing when, if ever, his imprisonment would end. His wife had wasted her youth waiting in vain for him. To avoid dismissal from her present job, as from so many others, she had pretended that she had no husband and had stopped writing to him. Sologdin had never seen his only son – his wife had been pregnant when he was arrested. Sologdin had gone through the forests of Cherdynsk, the mines of Vorkuta, two periods under investigation, one of six months, one of a year, tormented by lack of sleep, drained of his strength, wasting away. His name and his future had long ago been trampled into the mud. All he possessed was a pair of well-worn padded trousers and a tarpaulin work jacket, kept at present in the storeroom in expectation of worse times to come. He was paid thirty rubles a month-enough for three kilos of sugar-but not in cash. He could breathe fresh air only at stated times authorized by the prison authorities. And in his soul there was a peace that nothing could destroy. His eyes sparkled like those of a young man. His chest, bared to the frost, heaved as though he were experiencing life to the full.”

The two men volunteered to cut wood for the camp because they believed that it was for the soul. In between their sessions pulling on the handles of a whipsaw, they spoke about God and the meaning of life.

“You know, I don’t even mind acknowledging a Creator, some sort of higher Reason in the universe. I’ll even say that I feel it to be so, if you want me to. But supposing I found out that there is no God, would I be any less moral?”

“I don’t think so. And why do you have to insist, why do all of you always insist, that we must recognize not just God in some general sense but a concrete Christian God, plus the Trinity, plus the Immaculate Conception? Would my philosophical deism be the least bit shaken if I learn that not one of the Gospel miracles ever happened? Of course it wouldn’t !”

Sologdin sternly raised a hand with an admonitory finger.

There’s no other way! If you begin to doubt a single dogma of the faith, a single word of the Scriptures, all is lost! You are one of the godless!”

His hand slashed the air as though it held a saber.

“That’s what repels people! All or nothing! No compromises, no allowances made. But suppose I can’t accept it in toto? What can I be sure of? What can I rely on? I keep telling-the one thing I know is that I know nothing.”

Socrate’s apprentice took hold of the saw and offered the other handle to Sologdin.

A. Solzhenitsyn – The First Circle

Christians are not far removed from honest skepticism.  We never bought into the promise of scientific positivism embraced by Enlightenment thinkers before the time of Europe’s Troubles.  We can pretty much agree with Nerzhin when he said, “The one thing I know is that I know nothing.”   We know nothing… without faith.  It is faith that makes the difference.

He was a former roommate… about 26 yrs old.

On the day he moved in, he was beaming from ear to ear. He told me later that he had been on the streets but was trying to make a change in life. He was done with drugs, he said. Joe was scrupulously clean and I could tell that he was thrilled to be living in a decent place. I am not sure who it was that helped him move in. He sometimes spoke of his mother but according to Joe, she was living with a man that didn’t like him very much. Joe didn’t have a job although he pretended that he worked for a broker selling insurance. That was all a lie. As he later admitted, he was living off of gov’n checques. He spent most of his days laying World War Craft.

On the night I moved out he told me he was in trouble. “My mind is like a Picasso, you know those paintings where nothing makes sense.” Joe had a problem with paranoia. He once told me he thought someone was poisoning the water because it had a funny taste. I told Joe that these thing were not real and that he shouldn’t mention this to anyone. But he didn’t listen. I heard later that he had been kicked out of his place because he accused his roommate of breaking into his room and had screwed a padlock to his door.

He is living in dark, rank basement now and paying about the same rate as he did for the last place. He told me that people somehow know things about him and that there is a conspiracy to keep him from getting a place to live. He doesn’t understand that people judge by outward appearances; by the way a person carries themselves and how they speak. Joe never learned those social graces. 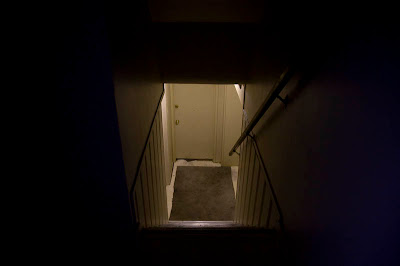 The hallway down to Joe’s basement suite. 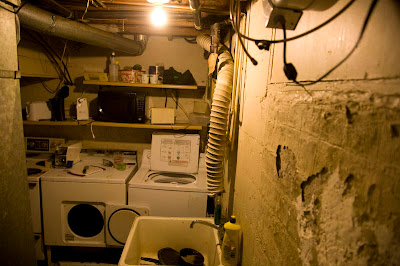 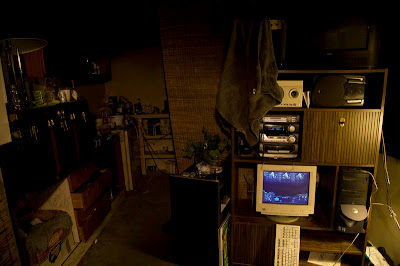 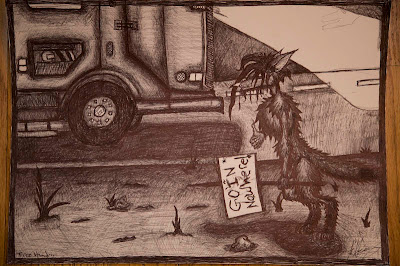 Joe said he was something of an artist which, I admit, I doubted. But he gave me this picture the next week – all done with a ball point pen.

I wonder sometimes if there is hope for Joe? Was there hope for the people of Naphtali and Zebulun?

A land wrapped in darkness like a cold wet blanket. A place of gloom where every song is screamo, every procession a funeral and every glance an accusation.

Those walking in darkness have seen a great light. Isaiah 9:1,2

Took a few pics this evening down along the Elbow… It is real nice this time of the year. The river run through the middle of the city but I have seen beaver, muskrat, a coyote with her pups and, last night, an osprey. What I haven’t seen is any fish rise to the surface… still tempted to try my luck… 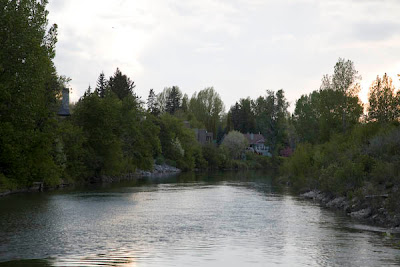 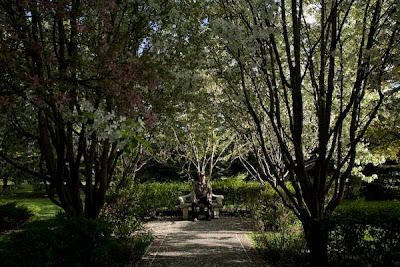 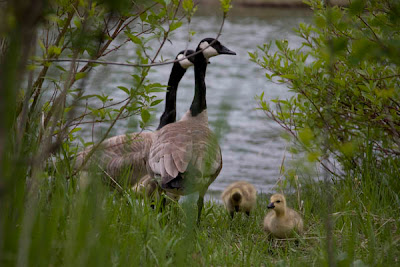 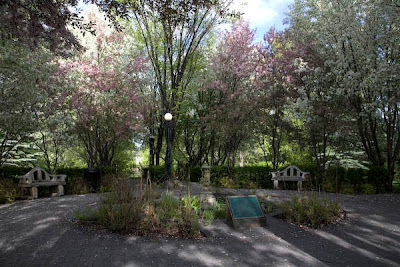 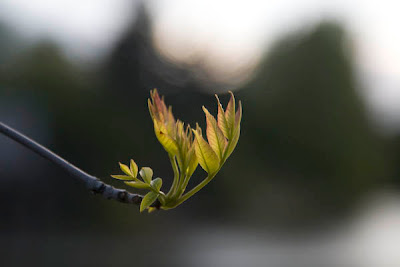 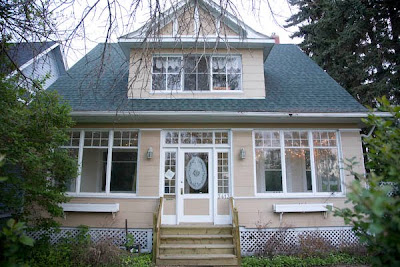 Our house for the last 6 months. It has been a great place to stay… i just noticed from this pic that our Christmas lights are still on… I’d better go shut those off.