Then I heard every creature in heaven and on earth and under the earth and on the sea, and all that is in them, singing: “To him who sits on the throne and to the Lamb be praise and honor and glory and power, for ever and ever!” The four living creatures said, “Amen,” and the elders fell down and worshiped. Revelation 5:13-14

I am high in the sky, and still I do not see the face of god. Gherman Stepanovich Titov – Russian Cosmonaut

On December 21, 1968 America launched three of its best men 1/4 of a million miles into space. Their mission was to orbit the moon – for the first time.  Their ride was a Saturn V rocket! I remember seeing one as a kid at Cape Canaveral.  The Saturn V is made of 5.6 million parts screwed, bolted, welded, riveted and soldered together in the shape of a giant Sharpie.  It took 7.5 million pounds of thrust produced by an engine that burned 17,000 tons of fuel a second for this flying skyscraper to escape earths gravitational field and send the space module on its way to the moon. To harness all this power the rocket was equipped with a computer with less processing power than a modern day calculator!

There was a lot that could go wrong on a launch like this. The astronauts privately figured they had a 1 in 3 chance of not surviving and a 2 in 3 chance of not making it to the moon.  At any rate, the insurance companies would not insure them!  (haha, no pun intended) They had good reason not too. The last Saturn V rocket nearly vibrated to pieces on take off and entered orbit in the wrong direction! And of course the tragedy of Apollo 1 was a tragic reminder of the risks involved when that much fire and fuel are together in one place.

Despite the risks, the launch went perfectly.   After three days the capsule entered the moons orbit exactly as planned.  Now, the primary task of the astronauts was to photograph the surface the moon and look for potential landing sites. Public relations were also an important part of mission (after all, they flew to the moon on tax dollars!) and so a broadcast back to earth was scheduled for Christmas Eve. The broadcast would be the most widely listened to broadcast in broadcast history. What were the astronauts supposed to say on this momentous occasion? “Do something appropriate,” was all the instruction they were given from NASA. Astronauts were notoriously poor at describing what they saw.  Some of their briefings were considered a ‘rhetoric disaster’… so it is somewhat surprising that NASA didn’t take a more active role in the broadcast.

The space module lost contact with earth as it disappeared behind the moon. It was a tense period. As one astronaut noted, “once in space hardly an hour would pass without a fresh opportunity for disaster.”  Floating quietly through space on the far side of the moon without a glimpse of the earth was a lonely experience.  For the first time man felt homesick, nor for a street address, but for a planet!  Imagine then, what it was like when Borman caught a glimpse of the earth through one of the small windows in the capsule as they round the backside of the moon!

Borman: Oh my G-d! Look at that picture over there! Here’s the earth coming up. Wow, that is pretty!
Anders: Hey, don’t take that, it’s not scheduled.
Borman: (Laughter). You got a colour film, Jim?
Anders: Hand me that roll of colour quick, will you-
Lovell: Oh man, that’s great!
Anders: Hurry. Quick…
Lovell: Take several of them! Here, give it to me…
Borman: Calm down Lovell.

The photograph taken by Anders became known as ‘earthrise’. Curiously enough, the photograph was not scheduled and seemed to have taken everyone by surprise. The focus of the planners had been on the moon.  That was, after all, what the entire program was about – to get man to the moon. Yet, for those watching the broadcast on Christmas Eve, it was the planet earth that was the focus of attention.  After a general description of their conditions on the module, Frank Borman addressed the citizens of earth,

For all the people on Earth the crew of Apollo 8 has a message we would like to send you,

The three astronauts then took turns reading from the first chapter of the book of Genesis.

And God said, Let there be light: and there was light. And God saw the light, that it was good: and God divided the light from the darkness. And God called the light Day, and the darkness he called Night. And the evening and the morning were the first day…

Since Copernicus published, On the Revolution of the Spheres, the earth has been demoted from  the center of the universe to just another planet.  The theory of Copernicus was further adopted by scientific materialists to argue that the earth was not placed in a privileged place in the universe by God but happened there by chance (this is the Copernican Principal as opposed to the Theory).  This philosophy allowed the possibility of life elsewhere in our galaxy. In the famous Drake equation, Frank Drake hypothesized that there were likely 10 million communicating civilizations in our galaxy alone. “I feel certain that we can find them now.” wrote Drake. By 1966 Drake’s views where regarded as orthodoxy. Prestigious physicists such as Carl Sagan became vocal advocates of the SETI program that scanned the skies for signs of intelligence. With this in mind, it is somewhat ironic that when man finally arrived in space and was able to look back at earth from 250,000 miles away, an achievement heralded by asto-futurist and scientific humanists as the next great step in human evolution, it actually had the opposite effect. People on earth were not looking out at the stars or at the moon – they were captivated by that lovely shimmering ‘blue jewel’ – bright, full of life, filled with the hopes and dreams of people yet no bigger than a persons thumb when held up against the dark vacuous ocean of space. From this perspective, the earth actually did seem like a very special place. Maybe life is a miracle after all?  For many who listened to William Anders, Jim Lovell and Frank Borman as they read from Genesis, the ancient truths revealed in that text stripped away all pretense to knowledge and power.  Having reached the heights of technological achievement, they chose to reflect on the beauty and the wisdom and the power of God.  This was America’s finest moment. 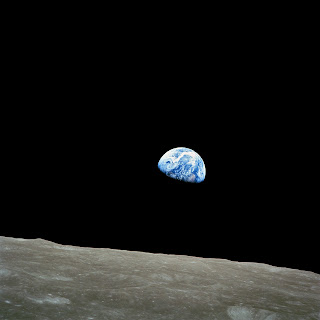 “As is stood in sunshine on this barren world somewhere in the universe looking up at the cobalt earth immersed in infinite blackness, I knew science had met its match. What I saw was almost too beautiful to have happened by accident.” Apollo 17 astronaut Gene Cernan, Earthrise, Robert Poole