In his early years, John Wesley was heavily influenced by the English philosopher, John Locke. This influence is evident in a letter he wrote to his mother. “I call faith an assent upon rational grounds; because I hold Divine testimony to be the most reasonable of all evidence whatever. Faith must necessarily, at length, be resolved into reason.”

His mother, Suzanna, responded to Wesley in what I think is one of the clearest descriptions of faith, “You are somewhat mistaken in your notions of faith. All faith is an assent, but all assent is not faith. Some truths are self-evident, and we assent to them because they are so. Others, after a regular and formal process of reason by way of deduction from some self evident principle, gain our assent. This is not properly faith but science. Some again we assent to, not because they are self-evident, or because we have attained the knowledge of them in a regular method by a train of arguments; but because they have been revealed to us, either by God or man, and these are the proper objects of faith. The true measure of faith is the authority of the revealer, the weight of which always holds proportion to our conviction of his ability and integrity.”

But there will be no gloom for her who was in anguish. In the former time he brought into contempt the land of Zebulun and the land of Naphtali, but in the latter time he has made glorious the way of the sea, the land beyond the Jordan, Galilee of the nations.  The people who walked in darkness have seen a great light; those who dwelt in a land of deep darkness, on them has light shined. Isaiah 9:1-2


One of the earliest and most detailed representations of the menorah is found on the Arch of Titus in Rome. Carved in relief in one of the panels on the arch is a scene from the Roman Triumph after Jerusalem was destroyed in 70 AD.  It shows the menorah together with the table of shew bread and the silver trumpets being carried on the backs of Roman soldiers through the streets of Rome. For centuries, the menorah on the Arch of Titus was a symbol of defeat for the Jewish people but it has since been reclaimed by Israel as their state emblem. It remains the closest connection we have to the actual menorah that stood in the 2nd temple.

Instructions for the construction of the menorah are found in the books of Leviticus and Numbers.

It was patterned after a flowering almond tree with a trunk, branches, buds and blossoms. The almond tree is the first to blossom every spring – its profuse delicate white blossoms are among the first signs of spring.

The menorah was hammered from gold – a material whose inimitable luster and sheen, its rarity and its incorruptibility made it the material of choice for the inner sanctuary of the tabernacle and for the menorah.

Its seven branches recall to mind the created order when it existed perfect and whole. As a measurement of time, the seven day week is the only cycle of time that is not determined by nature but has its origin in G-d

As the sole source of light in the Holy Place, the menorah “mediated through the eyes” what the priestly blessing said with words. (1)

The menorah was a symbol of light and life and finds its ultimate meaning in Jesus.  The apostle John said of Jesus, “In him was life, and that life was the light of men. (John 1:4)

This menorah is a fully functioning oil lamp that stands 24 inches tall and weighs 54 lbs.  It is cast from bronze at a premier art foundry in Israel.  Each of the bronze lamps has a removable bronze cover that holds a wick in place.

The daily rites were performed by priest who had been specially trained for this function; these were the uab, or pure ones.  Theirs was a physical rather than a spiritual purity.  They were circumcised, shaved the hair from their heads and bodies, washed frequently, were dressed in linen robes and, if they had intercourse with a woman had to wash before entering the sanctuary.  They were not obliged to be celibate, or lead a life of austerity.  An inscription on a stele runs as follows: ‘O priest of Ptah, do not refrain from eating and drinking, from getting drunk or making love, from spending days in joyous celebrations, or following the dictates of your heart day and night.  After all, what are the years we spend on earth, however numerous?”

Thy [priest of Egypt] did not preach any particular moral code, and ancient Egypt offers no example of a priest reproaching a Pharaoh with having committed an injustice, in the way the High Priest rebuked David….

Montet describes another scene from the temple:

Every morning the priest entered the holy of holies and made sure that the door was bolted.  he would then open the door, and see the god who was supposed to have slept.  he would wake him up, present him with his various garments, head-dresses and insignia, and proceed to dress him.  After the god had been dress, he ate his first meal; he would have two or three more during the day, like human beings.

This is quite a contrast to Yom Kippur!

Martyn Lloyd Jones writes in 1980, one year before his death.

To me 1967, the year that the Jews occupied all of Jerusalem, was very crucial.  Luke 21:43 is one of the most significant prophetic verses: ‘Jerusalem,’ it reads, ‘shall be trodden down of the Gentiles until the time of the Gentiles be fulfilled.’  It seems to me that that took place in 1967 – something crucially important that had not occured in 2000 years.  Luke 21:43 is one fixed point.  But I am equally impressed by Romans 11 which speaks of a great spiritual return among the Jews before the end time.  While this seems to be developing, even something even more spectacular may be indicated.  We sometimes tend to foreshorten events, yet I have a feeling that we are in the period of the end…. I think we are witnessing the breakdown of politics.  I think even the world is seeing that.  (Future Israel, Barry E. Horner)

Martyn Lloyd Jones was probably one of the most influential preachers of his day yet he had enough humility change his position on a significant topic.  D.A. Carson also writes about an interview with Martyn Lloyd Jones shortly before his death.  I think it speaks to the wisdom of this man.

“A few weeks before he died, someone asked him how, after decades of fruitful ministry and extraordinary activity, he was coping now he was suffering such serious weakness it took much energy to move from his bed to his armchair and back. He replied in the words of Luke 10:20: “Do not rejoice that the spirits submit to you, but rejoice that your names ware written in heaven.” In other words, do not tie your joy, your sense of well-being, to power in ministry. Your ministry can be taken from you. Tie your joy to the fact you are known and loved by God; tie it to your salvation: tie it to the sublime truth that your name is written in heaven. That can never be taken from you. Lloyd-Jones added: “I am perfectly content.” 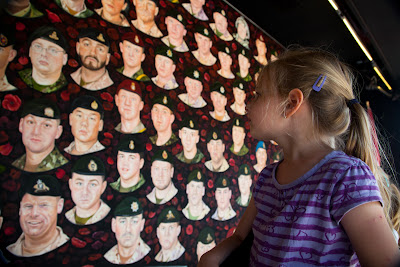 A heartfelt thank you to the soldiers who risk their lives for our freedom.