I was just looking through photo’s the other day and found this one from a camping trip this summer with Jon Kontz. There was a bear warning for the area so we were a little on edge in the first place. After setting up camp, we went down to the river to get some water. On the way back we came across this… You might have to enlarge the photo to see it. 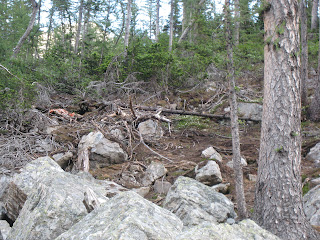 It looked like a half eaten deer carcass. I am not sure what is worse, coming across a mother bear with her cub or interrupting a bear from its meal! I saw a fight once from an old discovery channel show, between a wolverine and a bear over a kill and it wasn’t nice. Anyway, we had to get back to camp so we kept moving. Turns out, it was an old red and brown tent caught in the bushes! Worried for nothing!

Jon is in France now and just getting into language study at a university there. He just got his blog up and running… You can check it out http://jkontz.blogspot.com

3 thoughts on “Close Encounter with a Tent”