I had an interesting conversation with a native man I picked up today on my way out of Fort Qu’appelle. I was surprised to see him on the side of the road as the temperature gage on my car said that it was -17 C (it felt a lot colder than that) and he was in a wheelchair. He said that his car had been impounded because a signal light didn’t work although I think there might have been more to the story than that. He went on to tell me a little about his life. He hadn’t always lived on the reservation but he was back now that he had lost his legs. Although I didn’t ask him, he said that he had lost his legs one night while he was living in Regina. He could see the light of the locomotive coming at him as he stumbled down a set of railway tracks but he was so drunk that he couldn’t cover the four feet that would have put him out of harms way. He finished his story with a sad commentary, “But what can you do you know, life is like that… Its slowed me down a bit.”

It was just a short drive to his home which was situated on a slight bluff looking over the bald prairies of Saskatchewan – just a little ways out of Qu’appelle Valley. The house was standard gov’n issue typical of the reservations that I have seen. I wheeled his chair up a plywood ramp and past an old door that swung freely in the opening. As we pushed our way inside, the glass window pane in the door fell to the ground. The rest of the house wasn’t in much better shape. There were about 10 people inside, with all 3 generations represented. Although the house was dimly lit and I only had few seconds to look around, it was clear enough that its owners had lost all sense self respect and had given their lives over to drink and sloth (aided no doubt by the foolish policies of our gov’n).

There was a church near Joe’s home so I asked him about it. He chuckled a little and said that nobody went there… and something to the effect that it was just for show. The next day was a Sunday so I decided to go back with the idea that at least a small service must be held there each week. But Joe was right, the church had sat empty for some time. It still seemed to be in decent shape but there was no easy way to get to it. 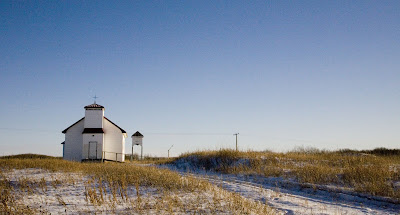 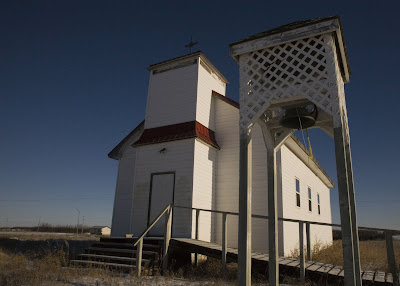 On my flight over, I came across an article in the National Post about some of the serious problems facing reservations and some urban centers today. The crime rate among native populations is skyrocketing and is a cause for serious concern. Gangs are becoming better organized and far more lethal. In some areas such as Winnepeg and Regina, native populations will make up over half the population in 25 years (growth rates stay the same). Politicians, NGO’s and the like are all wringing their hands and saying that we need to do something before we are hit with ‘a demographic Tsunami’…

Here are a few statistics from the article.

150 number of aboriginal doctors among the 60,000 physicians practicing nationwide

500,000 income, in dollars, in a lifetime, lost by an aboriginal male who drops out of school

10 number of times more likely it is an aboriginal will be charged with homicide, relative to non aboriginals

22,400 median income, in dollars, for non aboriginals that same year

52 percentage of aboriginals who have graduated high school

I wonder what would have happened if missionaries and frontier men such as John McDougall could have had their way? And where is the church now in all of this?