Biola hosted a the debate between John West from the Discovery Institute and Karl Gilberson from Biologos called “Can a Christian be a Darwinist?” You can find it here. In the debate, Gilberson often appealed to ‘the scientific consensus’, that great bastion of orthodoxy outside of which live ROUS, flat-earthers and other miscreants. To belong to this consensus, one must repeat the creed inscribed throughout their sacred texts, “Common descent is a fact of natural history.” Anyone who questions this dogma is, as Gilberson put it, “from the hills of Alabama” – as though this were the ultimate insult.

The theory of common descent is a interpretive framework that makes diversity and complexity a function of mutation and selection. Stephen Gould likened the process to the path a drunk takes from the wall of the bar to the street gutter. Change happens, the outcome is inevitable; the drunk will end up in the gutter and life will lurch from one form to another.

It is a theory that comes from looking at too many wall charts. Every sensible person feels that natures secrets cannot be explained by such a process. Walk through the maple forests along the Niagra Escarpment in October, and the drunk man lying in the gutter choking on his vomit is restored to his proper place as an object of pity. But is there any ‘scientific’ proof that would call into question ‘common descent’? I am not a scientist but I remember a discussion from one of my biology classes that has always stuck with me. It had to do with the molecule lignin.

Lignin is what gives strength to the stems of plants without compromising its ability to transport water to its outer branches. A complex molecule synthesized by plants in an equally complex process, lignin has a higher strength to weight ratio than steel. The emergence of lignin is thought to have represented a major leap forward for plant life in the evolutionary scheme. But this has recently been called into question by the discovery of lignin in a species of Red Algae. This find was… well, as one researcher put it, striking!

Monolignols [lignin] have previously been identified exclusively in terrestrial plants and have never been implicated in aquatic algal development; their presence in a marine red alga is, therefore, striking.

Land plants were thought to have evolved from green algae, not red algae, and lignin was thought to have been a later development that only came after the evolution of mosses, liverworts and hornworts. In the tree below, the species with red boxes around them contain lignin. The one at the very bottom is Calliarthron – a species of Red Algae that also contains jignin. It is separated by a vast distance in terms of its relationship to terrestrial plants. 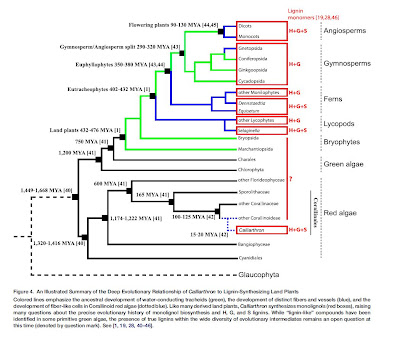 The authors of the paper note the implications of this discovery.

The discovery of polymerized hydroxycinnamyl alcohols [lignin] within the cell walls of red alga has major evolutionary implications. Because monolignol synthesis is exceptionally complex, it seems unlikely that Calliarthron and terrestrial plants evolved monolignol biosynthesis and polymerization completely independently.

It is ‘unlikely’ that lignin evolved separately (or at all for that matter) – about as ‘unlikely’ as someone winning the Indy 500 hammered. Thankfully the authors of the paper do not leave us in the dark regarding this mystery.

We speculate that lignin biosynthetic pathways may have functioned in the common unicellular ancestor of red and green algae, protecting cells from microbial infection or UV radiation and in Calliarthron, lignins may orient the fibrillar scaffolding that guides CaCO3 deposition.

If I understand correctly, they are saying that a unicellular ancestor of red and green algae had the ability to produce lignin even though it had no need of two of the major advantages that lignin is manifestly well designed to provide – strength and water transport. The authors suggest that the unicellular organism used lignin for protection from UV radiation or microbial injection. I suspect this’d be like saying that the new superalloys used in jet turbines were initially developed by Henry Ford for the bumper of his Model T. Even if we were to assume that a unicellular ancestor of algae evolved to produce lignin, it is incredible to think that it was not expressed in land plants for another 1 billion years, nor was it expressed in any other variety of Red Algae that we know of except one, Calliarthron. Now that is conservation!

Ultimately, the whole concept of a tree of life is flawed. It seems to me that the great variety of life is better compared to the spectrum of light. Classifications can be imposed and are useful to a point (ie. red, yellow, green and blue…etc) but to add a time element and infer evolutionary relationships is to say that blue must have evolved from green, green from yellow and yellow from red because that is how they run together in a rainbow.

My information is from here: Discovery of Lignin in Sea Weed Reveals Convergent Evolution of Cell-Wall Architecture