I went to an active Taoist temple today set in the midst of sky scrapers in Beijing.

In the temple were 76 rooms that represented the 76 departments of hell over which the god Dongyue presides. Here is an example of one of the rooms.

“The Department for Demons and Monsters” 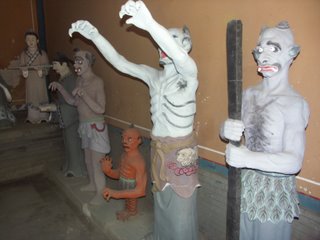 From the sign next to the exhibit – “Demons and Monsters are kinds of devils that often harm people in the dead of night. The department controls and supervises them and forbids them to wander and bewilder people.”

The department seems to be effective. I haven’t seen any of these walking around… have you?

1 thought on “Taoism and the Dongyue Temple”